Ann visited to Kuala Lumpur. We had some beers and Mexican food at Loco in Changkat Bukit Bintang.

When too much of beer, we have ideas …. what about a day trip to Malacca city?

Distance from Kuala Lumpur to Malacca is estimate around 120km, around one hour drive.

Malacca is one of the UNESCO site for its long history. It was first fall under Portuguese empire, then Dutch empire, then the British under the Strait settlement, and Japan.

Malacca City is the capital of the coastal state of Malacca, in southwestern Malaysia. at its Center, there are Dutch village, St Paul, Jonker Street, known for antique shops, local foods and street markets. 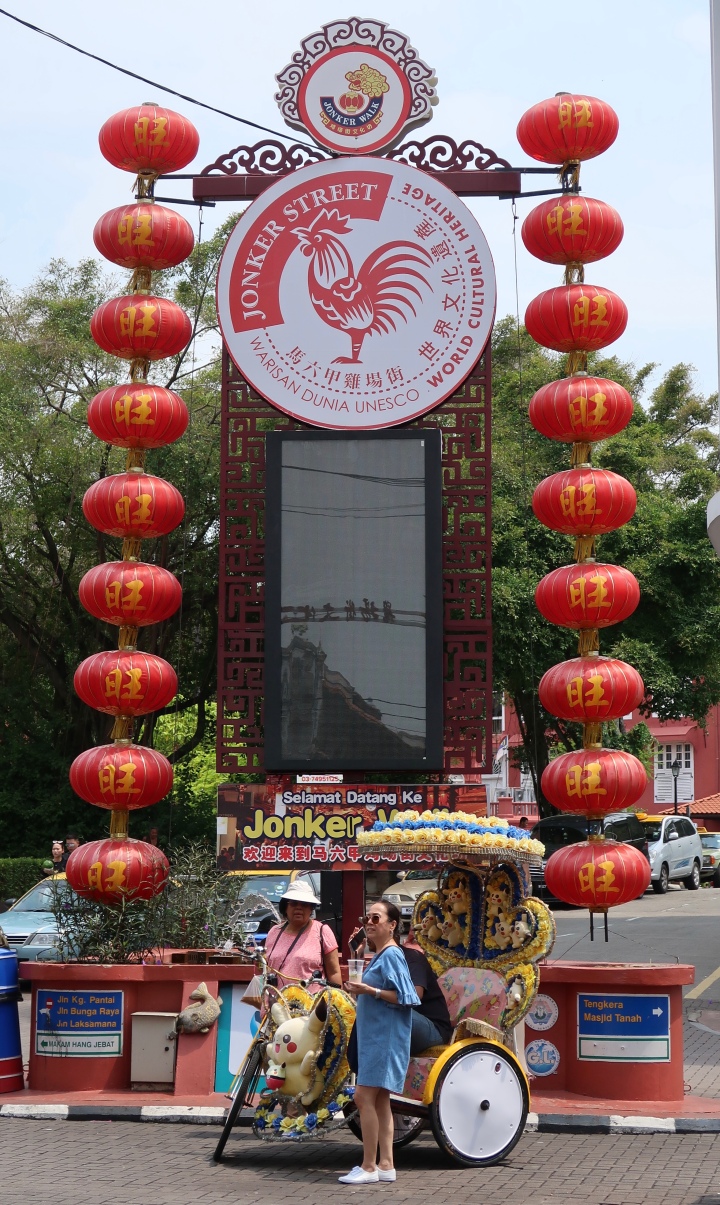 There are many cafes at the Jonker street, the Coffee Jar, hard Rock café, the Daily Fix cafe, Kaya Kaya cafe,… to name a few. We went to Jonker 88 being one of the vintage restaurant or coffee shop ( that’s how the local called them) that serves popular Malacca food like Nyonya laksa, Asam laksa, and Durian Cendol.

Inside the the restaurant, it is beautifully decorated with the Peranakan wood crafted furnitures, windows and doors, old painting and decorative items on the walls.

The difference between the old traditional coffee shop and this Jonker 88, they do not serve. It is a self service food provider whereby you have to line up at the stalls at the end of the shop for food. You will be watching how they prepare the food. Once done, you collect your food and pay at the cashier before bringing them to your table. It will be good if you come with a friend as your friend will be queueing for the table. If it is too crowded, you just have to ask politely if one would share their table with you.

We are lucky to get a table without any hassles since we are early. Jom! Let’s eat.

Well, the food is so good that it is worthwhile for the wait and let alone to self service. 😋

Some tips: I would recommend to bring some wet wipes and paper towels. When the sun is bright, and the place starts to get crowded, you will be sweating a lot while eating. If you can’t take much spicy food, the spice might bring you tears and running nose like feeling, and the wipes will come in good use.

We do not have much room for other food, so we take away some on our way home such as Nyonya pineapple tart, Portuguese egg tart, curry chicken in the bread, Nyonya dumplings and others.

We are not a big fan of chicken rice, so we skipped it. Many probably wonder what is so special about the Malacca chicken rice? Well, they roll the rice into ball-shape and served it with the chicken and their special chili sauce. Some commented that it taste much better, like eating sushi. 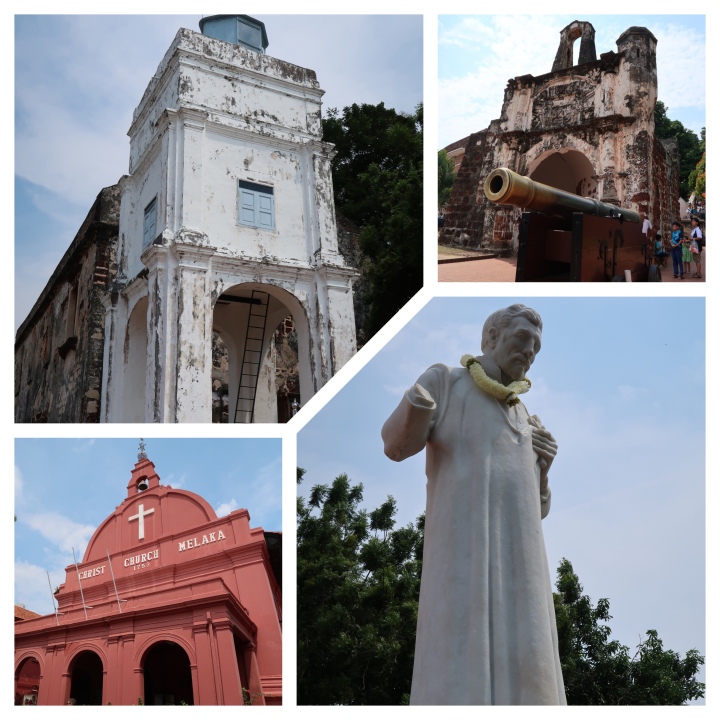 A Famosa, a former Portuguese fortress in Malacca, is among the oldest surviving European architecture that remains in South a East Asia. It is largely destroyed, only the Porta de Santiago, a small gate house, that still remains today. It is situated at the down hill of the St Paul’s Church ruins.

St. Francis Xavier statue was erected in front of the ruins of the church in commemoration of the 400th anniversary of his sojourn in Malacca.

At the heart of Malacca city is another historical structure, the Stadthuys ( means city hall in Dutch). It is known for its red exterior and nearby a red clock tower. When Dutch conquest the Malacca from the Portuguese empire, the old St Paul’s church is renamed as Bovenkerk ( upper church) and is remain in use by the Dutch community.

However, they built a new church besides the Stadthuys called the Christ Church to replace the old. It was painted white originally. Today, the distinctive red color scheme remains as the hallmark of Malacca’s Dutch-era building.

Here you can find Malacca river, also known as the Venice of the East, situated not far from the City hall. You can choose to ride on a 45 minute river cruise or find a cafe nearby to enjoy the scenic view of the colonial building, pre war houses, and the local settlement.

After the day trip in Malacca, we drove back to Kuala Lumpur. We wrapped up our day by having dinner at Jalan Alor street food at Bukit Bintang. The whole character change after you foot into this area with loads of food choices ranging from local, Chinese, Thai, BBQ and you name it. I just wish that I have second stomach to taste them all. 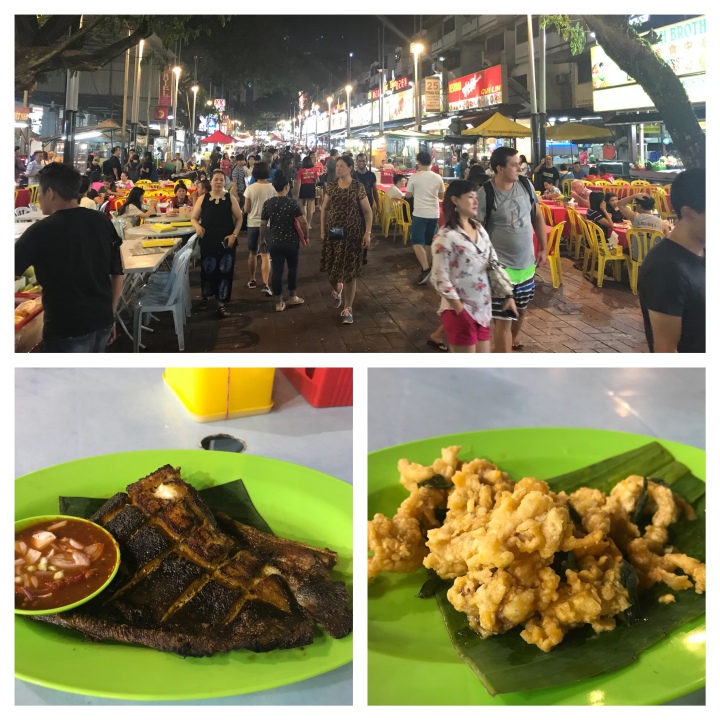 Last but not least, we close the chapter by having a night cap at the Pisco bar at Changkat Bukit Bintang which is just a stone thrown away.

It was short but a good trip. ¡Salud! 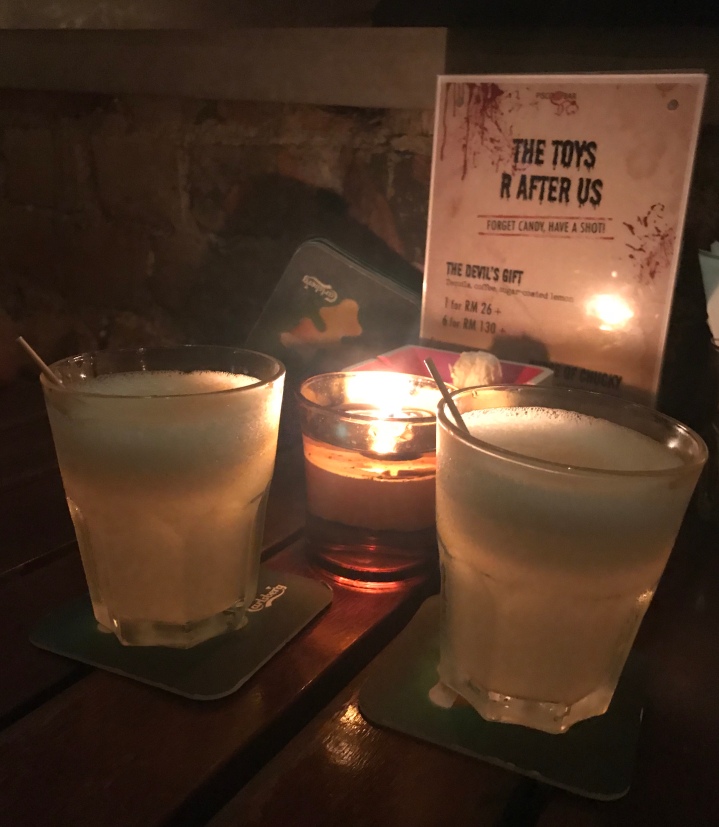 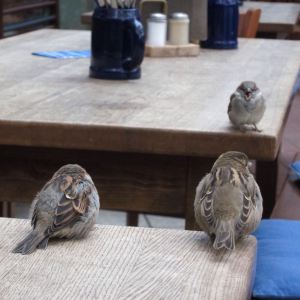 Travel, it leave you speechless then turn you into a storyteller.